Blame new year's resolutions, but I'm back blogging after a three year hiatus. I think I can promise it will be pretty sporadic, and considerably less theatre based than followers of my previous blogs might be used to.

There also might be the occasional swear word. I’m warning you now. 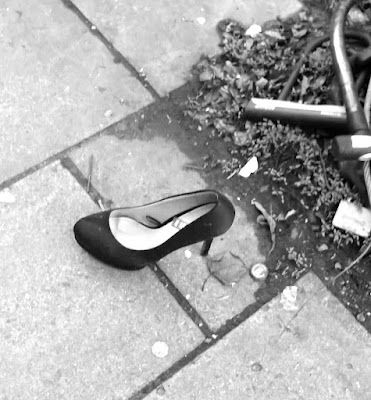 It is, I think, of note, how many single shoes we notice abandoned on the streets around our flat.

If it were pairs I could understand it better.

Sure, you could feasibly discard a pair were you, for example, an arsehole flytipping type who could not be bothered to walk the few metres to the nearest charity clothing bank, or an inebriated high heel wearer finally crippled by the sheer pressure on the balls of your feet*.

But a lone shoe?
Who leaves a shoe?

The lone trainer abandoned by the runner so desperate to achieve a personal best that they would forego a shoe despite the inevitable dog poo and broken glass...

The lone January flip-flop whose erstwhile partner gave up the ghost a couple of streets ago, leaving its antipodean owner just enough walk to decide that the uneven feel of a flip without its flop is worse than retaining one only ever so slightly comfier foot...

Sometimes it is a lone child’s shoe, and this, for some reason, seems particularly poignant.

I’m not talking about a shoe the size that could be tossed, un-noticed from a pushchair in a way that could, frankly, happen to even the most attentive parent – never mind your classic blasé latte and mobile juggling, several grand of bugaboo pushing Balhamite.

But the lone shoe of a five or six year old.

To me it always has something haunting about it.

*I used to believe, at least until my mid-twenties that there were essentially two types of high heel wearer…those like me who would hobble around wincing in blistered pain…and high heel demi-gods who floated around on a cloud of leg-flattering bliss. I hated and admired them in equal measure. I have since learned that they, too, are in immense pain but better at hiding it. When a woman (or man, although I have to admit most of my scientific research on the subject has been conducted during my oddly frequent conversations with strangers in ladies’ loos) suggests they have at last found a pair of ‘comfy’ heels – what they mean is that they can wear them for almost an hour without wanting to cry.**